Astrology is one of the most ancient philosophies still in existence in this world. Some estimate it to be more than 3,000 years old but recent study of more esoteric beliefs place it further back into the clouded past of human history.In ancient times , and up until today Astrology has been used to predict what happens to countries, the outcome of wars, economic trends and much more about personal course of actions as well.

Around the world, farmers know that for most crops, you plant in the spring and harvest in the fall. But in some regions, there is not much differentiation between the seasons. Since different constellations are visible at different times of the year, you can use them to tell what month it is. For example, Scorpius is only visible in the northern hemisphere's evening sky in the summer. Some historians suspect that many of the myths associated with the constellations were invented to help the farmers remember them. When they saw certain constellations, they would know it was time to begin the planting or the reaping.In course of time this dependence on the sky became a strong part of many cultures.Many nomadic tribes followed the night skies to move from one location to the other. 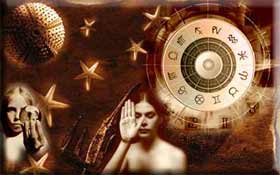 The word "astrology" is a Greek word that means "Science of the Stars." Astrology was used by the Chaldeans who lived in Babylon as early as 3000 BC. The people of China in Asia later became interested and began practicing Astrology . It is said that these people first noticed how the position of the sun influenced the seasons as well as the planting cycles of their agricultural practices. Horoscopes and astrology began with the ancient Greeks some thousands of years ago. They evolved the belief that the position of the sun and the planets also had an effect on a person's life and what future events would happen to them can be predicted based upon their location.

Then, somewhere in the year of 500 BC, philosopher Plato used Astrology and studied it further. This kept it alive, and it continued to spread on through the ages. However, it took a downturn when Galileo Galilei was the first astronomer to use a telescope in the 1500's. However, as time went by, astronomy once again took an upswing in popularity when it flourished in Egypt around the years of 300 BC. Then, during the Middle Ages, the practice of astrology quietly hid itself as the Christian Church became the predominent leading voice of the new world. It wasn't until the 1600's when an astrologer named William Lilly renamed astrology as being "Christian Astrology" in order to avoid the wrath of the Church and to make it more acceptable. This was instrumental in popularizing astrology and horoscopes of today.